We took a weekend break to new york, neither of us had ever been so how was it ?

I went with Brent a relatively new kiwi friend that I have worked with and knew him enough to feel that it would work out especially seeing as it was short enough that how bad could it be if it did get bad. Yes it was just a few days and via Chicago with American Airlines.

We met up at London heathrow and got off to Chicago. We had our own t.v.'s in the seat backs and reasonable entertainment on them. The food was not the worst I have had but paying also a premium for wine rubbed salt into the wound that was our cancelled flight from Chicago to Newark, New York. 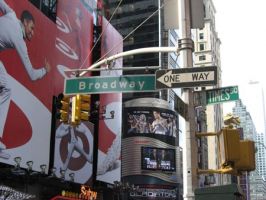 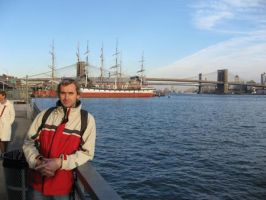 You see for me a bottle of red and I can sleep on a plane and that's got to be good. Well travelling at this time of year means that the flights get oversold and we were in a race to get in line quick and get down for standby. Not a great situation and certainly not the way I like to conduct myself. Its one thing to have to get a hotel and get away the following morning but another to have to wait nail bitingly through each flight for the rest of the night to find out. Its time for the regulators to step in here far too many of us suffer this on a daily basis. Still this is about New York and so I move swiftly along. We were a couple of the luckier (fitter in this case being swift to get to the right desk and indeed more clued up employee) ones and we got a ride to La Guardia being 7th and 8th on the standby list.

It was easier to get to the central mass surrounded by water called Manhattan from la Guardia and bear that in mind if you come. A cab can run you as little as 25 dollars from here. We stayed down town Manhattan, on 14th street in jazz on the town for about $25 dollars per person per night. We did this as we were arriving late in the day and we thought all we would be doing was sleeping. Hostelling can be a great way of meeting people but I have heard that the lack of good hostels in New York didnt make me want to stay there longer. I usually travel alone and this makes using hostels essential in my experience. I love that I meet like minded international individuals so easily and I get invaluable information. This time we were 2 and a hotel would make things a little easier in a few ways. Though we planned to not take a room for the big new years night and get away at 4am straight to the airport and on our way back to Chicago. This would prove in hindsight not to be the best idea. It can be very tough to find a room this night and the prospect of not using the room went against our grains.

Our first night there we were surprised that our dorm was full of sleeping travellers but we wanted to get out and maximise our limited time , American Airlines had taken enough already. So we headed out to a joint called The blind pig on 14th street. It was great a good bar and we stayed a while but not long enough to compromise the following day.

I got up pretty early and wandered out to have a read of my guide and get some coffee brent and the others in the room were all sleeping. I headed back after an hour or so of watching new york go by on a typical manhattan street. I went back to grab Brent and just before checking out we wandered to the Grenwich village but we think we were on a different side of it than what is normally more interesting we were by the university and by washington square. We had a nice coffee in a cute little place. It seems that New York has a ton of eastern europeans working here too.
We had an overall plan to take this trip without itinerary and do what came easy. So that said we didnt do the following:

The Statue of Liberty
Times Square for New Years...it was sheer numbers of people on both counts that beat us.

I was ok with this and realised that I would see the statue of liberty another time another trip. I did have trouble dealing with the fact that I didn't do one thing I did really want on my agenda, times square for new years. It really would have meant 6 hours in freezing weather with no toilets, and we didn't have a hotel and a long way home after, so I was talked out of it, and probably for the best.

The wolcott and Day 2.

We saw wall street and down town, but missed battery park so far the spot for catching the ferry to the statue of liberty. At every turn a delight of gothic architecture. And then Ground Zero. Difficult to imagine the size of them. It felt positive the mood but I felt a mixture of sadness too it wasnt overly crowded except for the visitor center and neither of us felt like the visitor center right there and then. I think I will go back and do that however one day.
Onwards to Brents kiwi bar the nelson blue. We had a speights or two and headed back via the subway.That night was a big farce that of the New York nightlife, unless your a list or prepared for bribery you cant get in to these so called clubs so we found a bar.We were around the west side and 21st street something like that. Got to chat to a few locals so that was cool and we had a good time, but I wanted to feel that excitment and experience a New York club which didnt really come. I also suspected that its not the real party goers who are frequenting them so the party, well just isnt a party, really their loss I say.

The following morning I went for a run in Central Park. It was amazing I got a real high with my tunes on adoring the mix of new rise and gothic as I ran up 5th. Weaving in and out stopping for the lights in my own world, but safely so. How far up is the park, is this a good idea, will I run to far, check my time. The first part of the park is a weaving affair, through some trees twisting track, wow look an ice rink! man this is a great run. Further on, need a map this park is so big rectangular so shouldnt be too difficult to navigate, need a map ! Now a reservoir, the Jacqueline Onassis reservoir. Should I go round it ? Do I have time how do I feel, I feel great have to go go go...I returned via broadway and times square, Brent was at the walcott and we headed out after I had got showered up - for some mamouth walking !

We had thought on doing the statue of liberty again if we rose early enough but I didnt want to get too weary considering the big day comming up. So we headed up 5th and took some food at a typical New York deli. It was not too bad indeed, but they weren't rude! The Delis are supposed to have a reputation for rudeness but new york is more polite than London I think. We did something more I struggle to recall but ended up in a bar and chatted to a few squaddies that were there. Then we hit top of the rock ! The rockerfellar, or top of the rock was amazing a fast ride up an elevator when finally they allowed us in, we kept retuning to this bar as they kept denying us entry based upon our ticket time...and thier apparent desire to be picky, the time on the ticket is between 2 times and they can choose. there were so many people around hawkers selling party things for tomorow I suppose. The views are great and despite the factory nature at the foot of the tour, you get to take your time at the top, could be romantic I got a couple of photos and felt this was a New York thing, whatever that means, maybe its because the rest of new york was something I hadnt imagined so far..

It was the 31st we checked out of our hotel, from 12.30 we would go until 4.00 am the following morning to get our bags stored at the walcott. I took a look round Macy's that morning found some very desirable items all a bit too much for me in one respect or another. New York is not overly hyper, It was the holidays I guess but that aspect seemed to surprise me, I need to visit in the summer. I think it will be a very different city. It was difficult to dress and be ready for the big evening, we would no longer be able to come and relax in the hotel, though we hadnt done much of that yet.

Brent managed to steer us back to the Nelson Blue after we had visited a few stores including the apple store.

Weary of the fact that we were homeless in a sense we were sat in the Nelson Blue. It was about 5.00pm and I was wondering if people really were already assembling for the times square party. Apparently yes, but to put things into perspective native New Yorkers tend to avoid this area at this time. Its just too difficult unless you manage to book a table at one of the close by bars or restaurants then I suppose.
So then it happened that we didnt make a move then all of a sudden it was clear that I was going to be alone if going to if I went to times square and I have to admit I would have but even to me it seemed like a real difficult night would ensue and more importantly a worse day after in Chicago. We had briefly kept an eye on the clock and aleady New Zealand had celebrated and England 5 hours earlier too.
We had a good night spoilt by the fact we had to go leave to get our pre booked shuttle to the airport.
Good job Brent was at hand to save the day as I had my watch set on some other country! We left the Nelson Blue and the celebrations behind.

In the shuttle were some girls from Hawai and I drifted in and out of sleep. The airport was very sobering indeed, and we got our flight to Chicago without a hitch.

And here is were the fun began. We couldnt get straight home and had to wait 10 hours in my case for my flight (we went and got a hotel for 69 dollars- and slept some), and then there was a fault we waited a further 4 hours on the tarmac in and out of the plane before it was finally fixed and got off. I don't remember the final delay total.

I was not happy and from waiting so long on the plane and in the airport it did spoil my overall trip since it was a short one. The moral of the story is perhaps to fly direct (which we couldnt afford) at this time of the year Chicago Ohare has issues in the weather over winter. But New York is great and don't think its a harsh rough place but the nightlife is rubbish, but then thats what the Governors want and the clubs will be their own worst enemy.