The Churches of Quito | Travel Ecuador 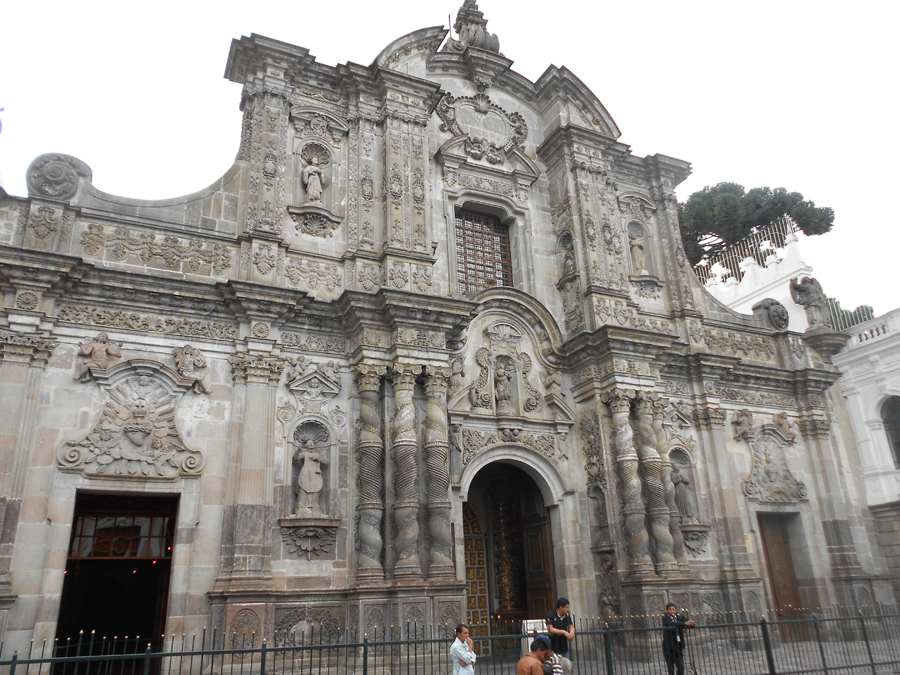 Residents of Quito, Ecuador sometimes refer to their hometown as ciudad de los campanarios: “city of bell towers.” It’s not hard to see why.

With over 80 churches inside the city limits, Quito’s skyline is crowded with domes and soaring spires, giving the world’s second-highest capital a luminous, transcendent quality unlike any other in Latin America. Other quiteño nicknames for the city are equally celestial: “city of swallows,” “eternal city,” “little face of God.”

The two churches listed below are among the finest not just in Quito’s Old Town, but in all of the Americas. To get the most out of your visit, it pays to hire a tour guide, either at the church itself or at a travel agency. Don’t forget your camera!

The Latin American baroque is all about excess, and everything about this Jesuit church is over the top: the mix of artistic styles, the lofty cupola, the crowded, mind-boggling ornamentation, the vast quantities of gold leaf covering everything.

After the foundation of Quito in 1534, there was intense competition amongst the Catholic church’s religious orders to evangelize the native population of the former Inca capital. The Jesuits were the last to arrive, and due to political difficulties, they were unable to consecrate a church of their own in downtown Quito for over 75 years. Undaunted, they undertook to build a structure that outdid all the others in splendor.

They succeeded. The Compañía is an architectural marvel that at times defies belief. Begun in 1609, it was over 160 years in the making, and every inch is supercharged with marvelous detail.

Highlights include the ceiling arches in the mudéjar (Moorish) style, the trompe l’oeuil staircase at the back, and the indigenous elements incorporated everywhere into the decoration (look for the cherubs with native facial features and the solar emblems in the dome’s interior).

The church also affords a somewhat morbid glimpse of the cult of saints in Latin America. Mariana de Jesus was an ultra-pious young quiteña who early on elected to devote herself to charity and penitence, practicing flagellation and mortification of the flesh as she visited the poor and the sick of her hometown.

When an earthquake and several epidemics devastated Quito in 1645, she offered her life to God if He stopped the suffering. She died, the plagues ended, and she became Quito’s first heroine. Today her remains are kept at the foot of La Compañía’s main altar; an ashen statue rests in the shrine to her memory.

The church employs many excellent English-speaking guides. If you’re lucky, they might take you to see the dome. Whatever you do, don’t miss this church.

This grand edifice is the oldest church in the Americas. Somber and imposing, it provides a counterbalance to the Compañía’s glittering brilliance.

Construction on the main building began in 1534, just days after Quito’s founding. The complex quickly proliferated, and today encompasses cloisters, a public square, a library, a large inner courtyard, a winepress, and even a jail where disobedient priests were disciplined.

Inside the church itself you’ll find one of the most famous statues in Ecuador. The Virgin of Quito is a representation of a winged Mary trampling upon the Serpent of the Apocalypse. Built in 1734 by Bernardo de Legarda, one of the greatest exponents of the Quiteña School of Art, it became so popular that it was chosen as the model for the Virgin of the Americas, the 100-foot aluminum statue perched atop the hill that overlooks Quito.

Not all of the monastery’s buildings retain their religious function. What used to be a religious school next door now serves as a museum of art, where you can see numerous cristos in the floridly emotional style of the Latin baroque.

Like La Compañía, this church too has its legend. When Cantuña, the indigenous artist charged with building the church, was given his commission by the Franciscans, he reportedly promised his soul to the Devil upon completion to meet the tight deadline. The demons helped, but just before the work was done, he withdrew one stone from the edifice and so saved himself. 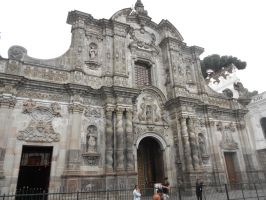 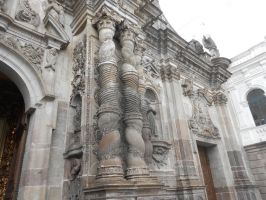 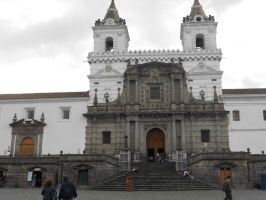 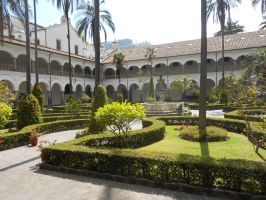 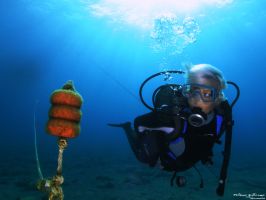