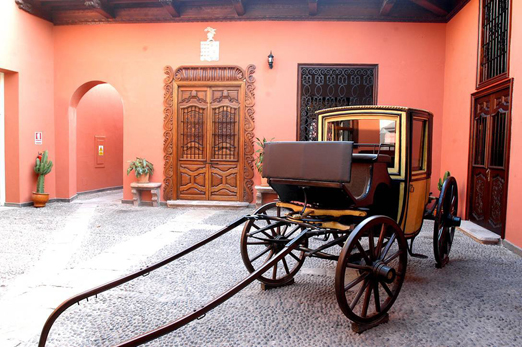 Lima was a culturally important territory for both the pre-Columbian inhabitants of Peru and those who arrived to the coastal region with the destructive Spanish Conquest. Today, the country’s history and culture can be explored through a number of nationally significant museums in the Central district of the capital.

Open since the late 1960s, Museo del Congreso y de la Inquisicion records the history of the Peruvian Inquisition. Victims of the inquisitorial regime, which stretched from 1570 to 1820, were tortured in the former National Senate, the very building in which the museum is now housed. The brutal methods used to torment inmates are graphically depicted in the museum through a series of wax-work figures. Visitors can also walk around the basement dungeons and former courtrooms. There are plenty of informational plaques around to direct guests during their visit.

Not that you would ever want to, but escaping food in Peru is simply not possible. The country is known for having an abundance of raw ingredients and a wide range of unique culinary creations. The Casa De La Gastronomia Peruana is a melting pot of all this food. Although located in Central Lima, the museum has details on regional specialties from throughout the ages, with information on influences, recipes, ingredients, trends and preparation techniques.

One of the more morbid experiences in the city, the Iglesia y Convento de San Francisco is home to a network of catacombs in which are stored centuries’ worth of skeletons. As well as the chillingly cool underground passageways, the interior of the church above offers plenty to see. The huge Diego de la Puente painting of the last supper depicts Jesus and the disciples tucking into typically Peruvian cuisine, including guinea pig, while the world renowned convent library contains some 25,000 antique texts along with a wonderfully sculpted spiral staircase.

Slavery was abolished in Peru in 1854, with the first slaves brought over from Africa by the conquistadors in the 1500s. In all, around 95,000 slaves were imported to the country during this period and today some 2.5 million people in Peru are descended from these enforced immigrants. The Museo Nacional Afroperuano recounts this significant period of the country’s history in great detail, with grim stories of the conditions for the slaves and the terrible abuse that they suffered. The museum also looks at the small communities that were formed by escaped slaves and the abolition of slavery in Peru.

Built in readiness for the International Exposition of Lima in 1869, the grand Palacio de la Exposicion is a fitting location for one of the biggest collections of art in Peru. An Institute of National Culture since 1973, the permanent collection in the gallery is comprised of paintings from the pre-Columbian era as well as modern pieces, in all incorporating around 3,000 years of Peruvian artwork. The museum is divided up into nine rooms each featuring a different strand of art. Among them are the textile room, with examples of elaborately woven tapestries, as well as the newest area of the museum, the room of silver, inaugurated in 2003, which has fine examples of Peruvian and colonial jewelry.