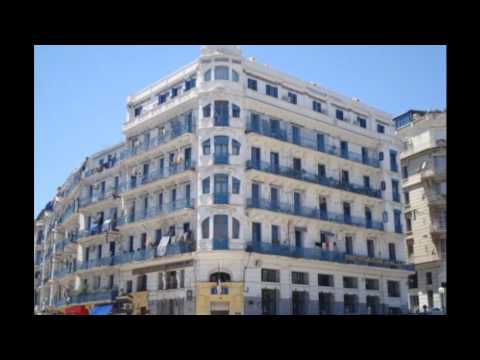 Bienvenue, Algeria. To hear French spoken in this part of Northern Africa, isn't a surprise since it was once colonized by France. It was also ruled over by the Ottoman Empire at one time.

Perhaps they all fell in love with Algeria's 1200km of beach, its mountains and forests that cover only one-fifth of the country's 2.3 million square kilometers. The other four-fifths are the sands of the Sahara Desert.

As for sand, it isn't unusual to see people camping out on Algerian beaches, since its totally legal. Just remember to let the local authorities know you're doing it.

While not illegal, drinking in Algeria is not encouraged. Although the country does produce some wonderful wines that are usually served in the more upscale restaurants and hotels.

Respect the locals by not imbibing, try the mint tea instead.  Try the super-strong Turkish Coffee, which goes nicely with Algeria's blend of Turkish, French, and Arab cuisine.  If you're looking for something to eat along the coast, you'll find plenty of restaurants serving up more traditional French or Italian dishes.

Because Algeria has a large Muslim population, it is best to refrain from visiting the country during the holy month of Ramadan; where Muslims refrain from eating during the day. Try to remember to be respectful of local customs.

Getting to Algeria is quite easy, as the country is serviced by an International Airport in the city of Algiers (Algeria's capital city), as well as ferry arrival to its port from points all over the Mediterranean.

If you're coming from Tunis (Tunisia) or Constantine, rail service is another way of getting here. Buses are readily available to take you all over the capital and beyond.

Arrival in Algeria will go much easier if you've got your passport, visa, and vaccinations all in order. You'll need to make sure you've been protected against Typhoid, Hepititus A, and Diphtheria.  Only those arriving from places with Yellow Fever outbreaks must have a medical certificate for anyone over the age of 1.

Once you've gained entry to Algeria try shopping for some locally made goods like leather or jewelry. One caveat to that, the import/export of gold isn't allowed.  And make sure you carry cash since ATMs aren't widely available outside Algiers, and travelers cheques are only accepted at the very best of hotels.

Accommodations in Algeria follow two seasons, Winter from October to May; and High Summer from the end of June to the beginning of September. Youth hostels are available for anyone looking to save a few Dinar, the official name of Algerian currency.

It is also good to know that homosexuality in Algeria is illegal, and penalties such as imprisonment are the norm. And traveling at night isn't recommended. Algeria is generally an early to bed-early to rise country.

Don't let that stop you from visiting this diverse and vibrant country. Algeria has a long history, friendly people, and a lot to offer anyone willing to travel a bit off the beaten path.