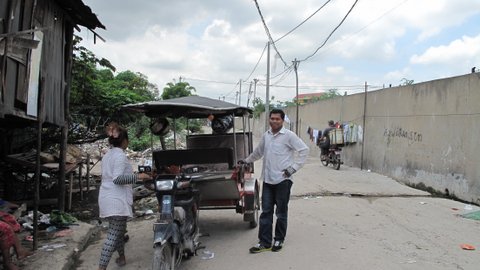 “Sure, no problem.” A few minutes later he showed up, tucked my passport and $100 into his shirt pocket, and fired up the tuk-tuk. Problem resolved, it was back to marking.

When living overseas – particularly for women  – it is essential to have someone who can run the gauntlet for you. A person who knows where services are, can source whatever is needed and answer questions about cultural etiquette. This might involve going to the grocery store, finding a shoemaker or warning you that the area is dangerous and to keep your handbag secure.

Nick – his Khmer name is Sann Bun Nit – was born in the provinces. Early on he realized that learning English was the way to go, so at 16 he invested 2,000 riel (about 50 cents) an hour to study. That was a considerable sum in Cambodia at the time.  Good plan as he was able to get a job in a guest house when he moved to the bright lights of Phnom Penh.

Because his English skills were good and he is personable, Nick was able to relate to the guests and became a sort of unofficial second manager. He made a commission on selling boat tickets, organizing visas and arranging tours.

When developers arrived to fill in the lake, however, Nick’s job disappeared along with the guest house. Without formal qualifications or political connections, he was in a precarious situation in terms of employment.

Life behind the handlebars

“I wanted to be a guide for western people, not just an ordinary tuk-tuk driver,” says Nick. He organizes tours to places tourists want to visit – the National Museum, the Killing Fields, Wat Phnom – and adds suggestions of other places he thinks people might enjoy.  He also knows of non-tourist spots and places to eat.

“Good guests take tours and they pay what is fair.” continues Nick, “The worst part of my job is waiting. Once I didn’t have any customers for three days. In the high season I make 20 to 25 dollars a day. In the low season it is around 10 to 15. With that I have to buy food, water and petrol. Rent for the tuk-tuk is $3 a day.” On a regular day he works 10 to 12 hours. It doesn’t add up to getting rich quickly.

In terms of a family life, his ex-partner – who works in a garment factory – and four daughters live in the provinces. He visits and sends money when he can. Nick’s long-term plan is to run his own business, “I know how to run and guest house and a restaurant,” he says.

Down in the Dumps

When I started the Down in the Dumps project, Nick became our official tuk-tuk driver and translator. Using money donated by kith and kin we started to work with the people who live at the Steng Meanchey garbage dump. They scavenge for recyclable plastic and tin and eke out a bare existence. When asked what they needed the answer was “rice, tins of sardines and soy sauce.”

We make regular runs – particularly during the rainy season when life is particularly hard – but without a pattern so as not to create a dependency. I give Nick the money and he goes off to get the supplies. I suspect he takes a bit of a commission, but that is to be expected as that is how the economy operates in Cambodia.

On a personal note

Nick – sort of like a cross between a driver, a friend and a little brother – has become my reference point for all things Cambodian. Is this culturally correct? Where can I get a clothes tree? Every woman about town needs a reliable tuk-tuk driver she can trust.

Nick often says, “You do a lot for me.” Not really, it is just a matter of helping out from time to time, like buying him lunch during the low season. I had business cards made for him and recommend him to my friends. Sometimes I over-pay him, sometimes it is a touch on the skimpy side.

In August I arrived in Phnom Penh at 01:30 after a 27-hour trip.  Even though the plane was three hours late, Nick was waiting for me at the airport. It is reciprocity.

Email: This email address is being protected from spambots. You need JavaScript enabled to view it.

Jody Hanson is an insufferable travel junkie who has visit 107 countries – 67 on her own – lived in nine and holds passports in three. She has visited all the countries in North, Central and South America except for Venezuela, Guyana, Surname and French Guinea. She wrote this article on behalf of Tucan Travel who offer many Southeast Asia tours including to Cambodia.