Top Things to See and Do in China

Attractions and sites abound in China, whether you choose to visit the capital of Beijing or take a hiatus to Shanghai. You will never be out of things to do while you enjoy a holiday on the Asian continent. One of the main events of your trip to China should be a visit to the Great Wall of China, which can be visited at various points along its lengthy course.

#1 - The Great Wall of China and Its Major Sections

The most popular section of China’s Great Wall is Badaling, which never stops being filled with visitors and tourists. It may be best to see this section during the week as the weekends can be somewhat harried. The Badaling section is approximately 72 kilometres or 45 miles from Beijing. Restoration began on the wall in 1953.

You can visit this section from 6:30 a.m. in the morning to 7:00 p.m. in the summer and from 7:00 a.m. to 6:00 p.m. in the winter. The Badaling section has been open longer than any other part of the attraction and is the best preserved. Tourists can see beautiful scenes of the trees below the wall. World celebrities have visited this section, including Margaret Thatcher and former U.S. President Richard Nixon.

The Mutianyu Section of the Great Wall of China is noted as being the longest fully-restored section of the wall. It is about the same distance away from Beijing as Badaling, or about a 1.5 hour drive. The long section of the wall has been completely rebuilt and is open year-round from 7:30 a.m. to 5:30 p.m. each day.

The wall is unique in that it is designed with fortresses and watchtowers spanning its length and features crenulations as well. The First Lady Michelle Obama has been a visitor to this section of the Great Wall.

Eating establishments near the wall include Subway and the Schoolhouse. You can stay at the Brickyard Eco Retreat or Home of the Great Wall if you plan to see the wall in this section.

Because it is steep, the Simatai section of the Great Wall is the most perilous and dangerous. It is located from Beijing about the same distance as the other previously-mentioned sections. The Simatai portion of the Great Wall was acknowledged in 1987 as a World Heritage Site. Try to see this part of the wall during the autumn as the red display of leaves is beautiful. The wall is open year-round from 8:00 a.m. to 5:00 p.m. Many of the visitors to this more rustic area of China hike or take pictures. Food is provided at local farmhouses in the area.

The Jinshanling Section of the Great Wall is a very popular part of the wall. It is noted for its beacon towers that have been restored. The Jinshanling Section is about a two-hour, 10-minute drive from Beijing, or about 154 kilometers/96 miles. The wall, which is half-restored, is open from 8:00 a.m. to 5:00 p.m. year-round. Accommodations and dining are provided at the Jinshan Hotel.

The Gubeikou Section of the Great Wall is totally unrestored. Its distance from Beijing is approximately 90 miles or 146 kilometres. Exhibiting a totally natural appearance, the wall is open all day, year-round. Crouching Tiger Mountain is situated in the Wes, and Dragon Mountain is located in the east.

The Crouching Tiger Mountain is rather on the steep side when compared to the gentle slope of its counterpart, Dragon Mountain. Visitors to this rural area can eat at various farmhouses. The Boutique guesthouse known as the Great Wall Box House is also located in this section of the Great Wall. 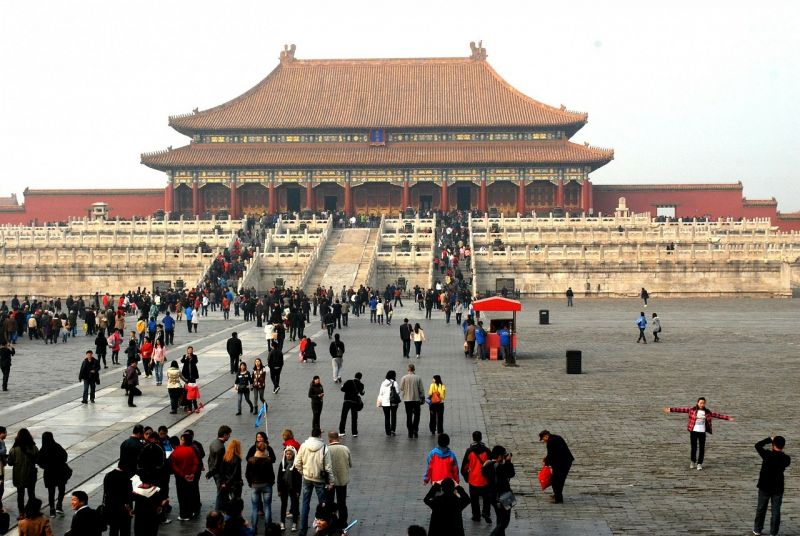 The Forbidden City is located in the heart of the capital, Beijing. The attraction is also referred to as the Imperial Palace Museum. The City was constructed during the Yongle Period or Ming Dynasty.

One of the major discoveries in archaeological history, the Warriors were formerly buried underground for a period of 2,000 years.

The Yangtze River is the longest and largest river in China, covering a length of 6,300+ kilometres.

The Li River in Guilin is part a Karst tourist site – a topography made of limestone and dolomite, which has been carved out by water.

A landmark of the city of Lhasa Apso, the Potala Palace is a spectacular-looking castle-like building compound that covers 360,000+ square metres. It showcases 360,000 square metres of the palace.

The Bund features a prominent waterfront promenade with clusters of buildings that were built during the 20s, 40s and 20th century.

Located in northern Sichuan, this lovely valley is well-known as a kind of Chinese fairyland with its snow-capped peaks and lush and verdant stretches of trees – all homes to indigenous bird species.

West Lake, Hangzhou is situated in the western section of Hangzhou. The natural area is embraced by lakes and green hills on each of its three sides. Historical sites can also be found in this area.

Of the above sites, all are interesting, but the Great Wall of China with its various sections is one of the sites that you will need more than just one day to see. All of the attractions point to the relevant role that arts, culture and history have played in China and their impact on the country today.