Fishing the Gulf of Thailand

Wherever I travel I look for sport fishing opportunities. While touring Southeast Asia my home base was Sihanoukville, Cambodia’s beach resort on the placid Gulf of Thailand. Thousands of small commercial boats fish the gulf for mixed catches of bottom fish and squid, staples of the city’s beachfront restaurants. I wondered what other fish were out there.

I saw a charter fishing boat moored near the commercial port, but there was no skipper to be found. I heard these charter boats come and go. They target barracuda and marlin and the fishing grounds are a costly four hour, full throttle run. Fisherman’s Den Charters and Pub promised catches of Barracuda and Dorado at a reasonable price. I booked my trip over a couple of pints. 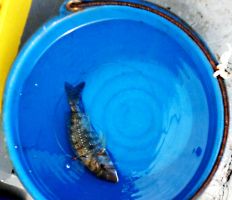 Fishing Little One in the Bucket 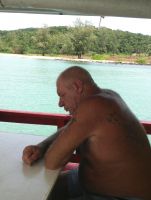 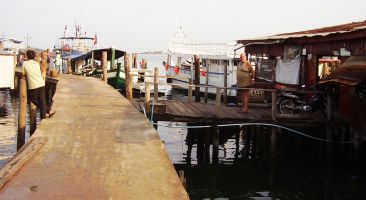 At seven the next morning, 20 eager anglers from all parts of the globe rendezvoused at the pub. A fleet of tuk-tuks and motos took us to the harbor in about fifteen minutes. Our vessel was about 50 foot, with squat lines and an upper deck. It was comfortable and could accommodate a couple of dozen anglers around the rails for bottom fishing.

Our skipper was the pub’s rotund and taciturn owner. We set out from the port at a good clip, and on route trolled three shallow lines with large Rapala plugs and plastic squid. Two Asian deck hands set up the lines. Presumably guests would take the rods in rotation. This would be our best chance at Barracuda, Dorado or other fast predator fish. Unfortunately these troll lines never attracted fish. We never caught anything like the promised Barracuda or Dorado.

We dropped anchor after an hour of trolling and began bottom fishing. The deckhands cut the bait and when fish were caught, they took them off the hooks and stowed them quickly away.
I fished beside a young British couple, and an old sailor who joins these trips for free to give occasional assistance with the boat and the gear. The British gal had never caught a fish in her life until two hours into the trip - her excitement was infectious.

“I’ve got one! It’s a real fish!” she shrieked endearingly.

The skipper moved the boat several times whenever the bite went off, always trolling for Barracuda between spots. Everything we caught looked liked some form of Scorpion Fish (Sebastodes). These tasty bottom dwellers, in their regional varieties, are found in seas around the world, including my home waters off Canada’s West Coast. They have stout brownish bodies, with thick scales and squared tail fins. They are to be handled with care to avoid the sharp, toxin tips on their dorsal and other fins.

Just beforenoonthe boat pulled into a bay on one of the islands. Most of the guests went for a swim before lunch. The bay was tranquil and scenic, the water clear down to a sandy bottom.
After the swim a hearty stew was served. Beer and soft drinks were available at pub prices.

We weighed anchor and motored towards our next fishing spot. I was sitting next to one of the trolling rods when the rod tip started twitching. I grabbed the rod and started reeling in. With a groan I hoisted the catch aboard. It was a plastic bag.
Altogether I caught about 30 fish, ranging from a quarter pound to two pounds. Each of the 20 guests caught roughly the same amount. The deckhands stowed away even the smallest fish.
The arrangement was that the skipper kept the entire catch. We guests were invited to the pub that evening for a British style fish and chip fry up.

It was a fun day of fishing, despite the limited catch. That night’s fish fry back in Sihanoukville was also enjoyable, mainly for the company of my fellow anglers. When I saw the buffet though, I wondered, “Where’s the rest of the fish?” Collectively, including the tiny fish, we had landed enough to feed five times our number.

It seems the Gulf of Thailand is largely fished out of the bigger species. If you’re looking to catch and keep your fish consider buying some fishing gear and hiring one of the passenger ferries that serve the islands.